The old plan was to do the best I could to spruce up my circa 1990 Victorianesque front door this winter. I gleefully abandoned that plan when I found a door that’s close to period correct that’s almost narrow enough. Almost. I’m a small bit nervous about trimming allowances.

Obviously the door needs to be stripped. I’m thinking I’ll pick out details on the outside of the door by painting it 2 colors. Nothing too high contrast though; that can get garish. Or if it winds up too nice to paint maybe I’ll stain it instead. I love the fancy little ledges below the glass that are so common on old doors, so I might add one to mine. I’m also hoping to get nice beveled glass, but if I have to choose between beveled and laminated (the best for burglar resistance) I’ll have no choice but to go with the latter.

Now that the door is going to be authentic, I’m going with clear glass, which makes me feel much better than hemming and hawing over textures that I wasn’t that thrilled about. For privacy I’ll get a sheer curtain panel hung on 2 rods. Basic, plain, traditional, and lets most of the light through.

(Speaking of light, have I said lately how excited I am to take down the awnings?)

Then there’s the hardware, my favorite thing. I’ve said before how excited I was to get the one and only old door that came with my house back up, along with its glass knob and Art Deco back plate. I also scored another matching back plate at Philadelphia Salvage. They’re a South Philly thing apparently.

Across the room, I put in a vestibule door that a neighbor gave me, salvaged from his house. It came with hardware in a different style but I’m guessing it would be from the 1930’s like mine.

At first I thought I’d make all the hardware match downstairs, install the Deco back plates on the vestibule door, and put something else on the back side of the basement stairway door. Then I thought maybe it was better to honor the history of the vestibule door and put its original hardware back on and hold the third Art Deco back plate. But now that I have an old front door with a mortise lock I prefer a third option. First off, I’m kicking myself a little bit for splurging on Baldwin hardware that I won’t be keeping.

But anyway, I’m putting a fauxriginal knob on the outside of the front door just like I have upstairs. The door came with cast iron roses attached and I have white porcelain knobs to spare. My parents have a pristine deadbolt that I’ll install. It’s conspicuously shiny, but it’s Schlage and I’d rather not carry an antique skeleton key in my pocket. Even though that would be cool. 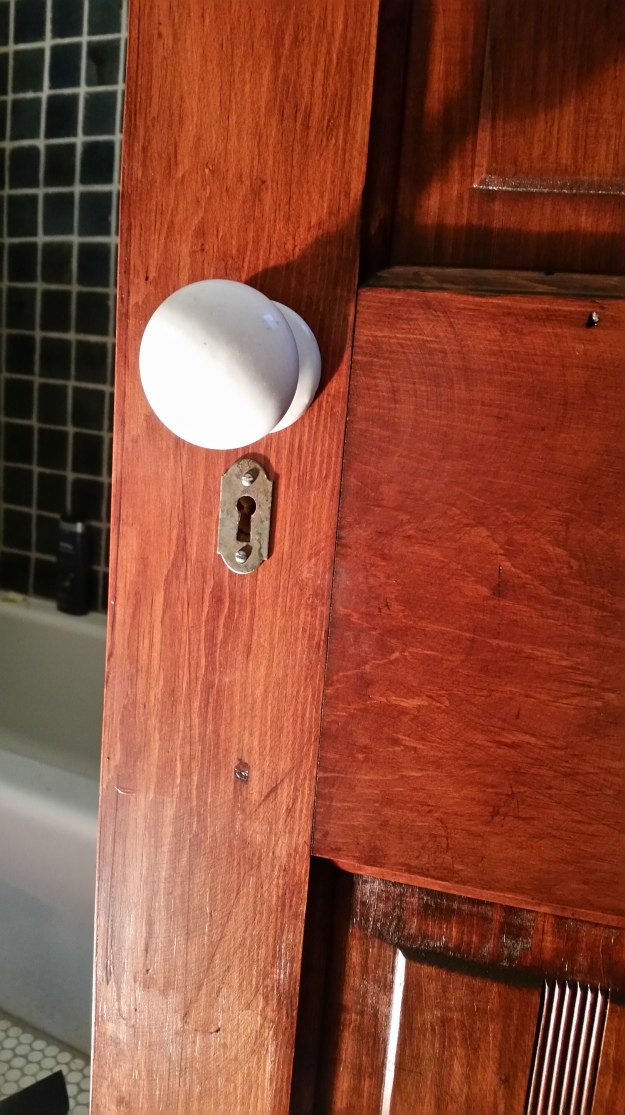 Inside, I’m planning to install one of my 1930’s back plates on the inside of the folk Victorian front door. That will give some vague cohesiveness to the first floor, and it’s something people actually did to their Victorian doors at the time. My new plan is to use the vestibule door pattern in the vestibule and the Deco pattern in the living room. I think that gives me the best combination of cohesiveness and letting my neighbor see his hardware when he walks into the house.

The front door is now on hold until the other exterior work is in progress. Phew. But if I have the ambition and it stays warm enough to leave the vestibule door open, I just might restore it in January. The better everything else looks, the more I notice bits of nasty like this.

I’m getting fed up with how little is getting done. Somehow, this frustration is leading me to do less. At this point, I’m trying to decide exactly how I should detail the insulation on the front bedroom wall. If you want to help give me ponder over bringing together modern insulation and old fashioned masonry, please read the next paragraph. If not, you may be bored and prefer to skip to the following one.
END_OF_DOCUMENT_TOKEN_TO_BE_REPLACED