The front bedroom is the least changed room in the house. To start, it had a crazy 1-foot-deep closet and a door connecting it to the middle bedroom, which is now the bathroom.

So there was enough of the middle bedroom left over to get me a good closet, but I needed a bigger door opening than the one above. I found big fancy doors at Philadelphia Salvage that were just the right size. 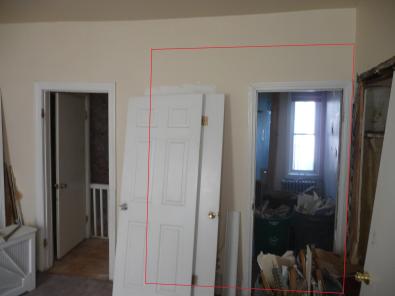 Awesome door. Yes it’s upside down. Trust me, the other one looks the same.

I stripped them, bought reproduction pocket door hardware that was big and fancy and covered where the knobs used to be, and the Irishman hung them as bypassing sliding doors.

This is a little bit anachronistic, trying to make a 1950’s-60’s door configuration look like a Victorian one that is too grand for the house anyway. But it gave me nice doors that don’t swing out into my furniture so I say it’s fine. And plus, it means that a house in South Philly has a closet like this. Too bad I’m not into clothes and have no intention of filling it.

Now that the new closet door took one wall away, I wanted to make the old closet wall usable. But the chimney can’t just go away, so I built the whole wall in, making the room about 1 foot smaller. There’s room for a bed in the middle, but on either side the wall is framed out for cut 2 niches for built-in bookcases. One is where the closet was; the other used to be part of the room. Right now there are sections of wall with no framing behind them.

On to décor. I inherited this rather ornate Victorian bedroom set. It came from my grandmother’s aunt who got it right the third time and married a man who owned half the Wildwood boardwalk before the stock market crash of 1929. Then a good friend of the family gave me a little pan light, probably from the 1920’s or so, and a traditional Oriental style rug. 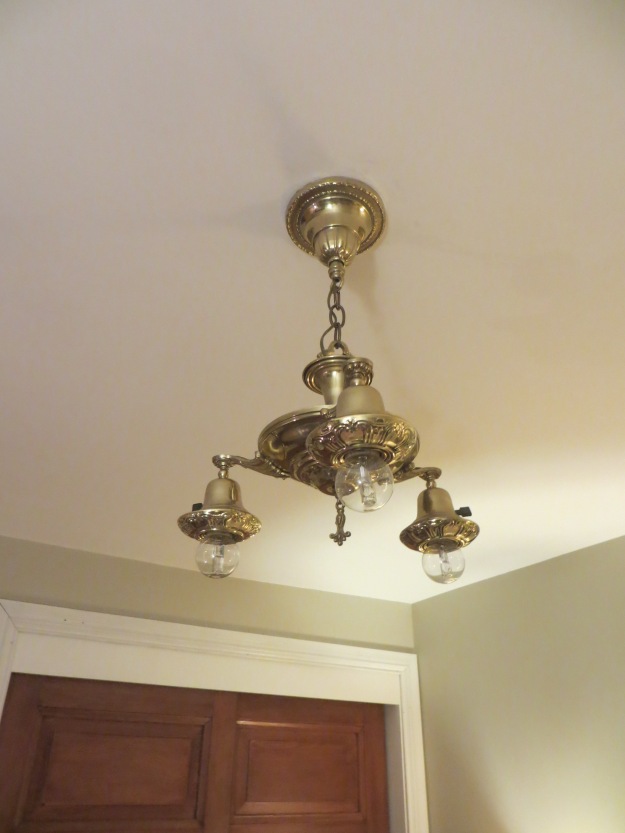 With that I have a cheap bed from IKEA, a pair of Colonial style chests, and a pair of mid mod lamps. I said with how formal the room was coming to look I wanted to make it look like a Victorian whorehouse. But then I painted the walls a sedate color. So anyways, before I show you the room now, here’s my worst progress photo. Yes, I was using the room like this.

And the after. The one below is about the same angle as the first photo in this post. When the bookcases are added, they’ll be in the wall behind the night stands.

And that fancy furniture I was talking about. The desk belongs in the back bedroom, as do the mattress and box spring behind that piece of plywood.

I’m at a bit of a stalemate with the décor in here. After Phase 2 is complete and I have permanent windows and no awnings, the cheap blinds have to go and I need something nice that blocks out the street lamp that’s like 8 feet from the window. Don’t forget where the radiators are though. The comforter is not nice (Nana bought it at Bradlee’s) and is starting to age, so it will also go. I have no attachment to the bed frame and may want a queen size bed eventually. The rug could stay but I’m not wedded to it. If you have ideas on how I can decorate around the marble topped furniture, I’m all ears. Understatement is usually my thing, but I was considering letting this room be more eccentric.

If you’ve known me a while, my excitement over this little thing won’t surprise you so much. The plan for the weekend was to paint the baseboards in the bedrooms, turn the heat on, and have my 4th moving day, bringing in furniture that goes in front of the baseboards in the bedrooms. But then we had 68 degree highs this weekend, which was crazy. But it was a rare chance to put off the heat and take the windows out and paint them, so I’m not complaining.

I put really good Marvin wood windows on the back of the house. Meanwhile the front windows are total crap, installed so they don’t close right, caulked shut where the drafts were really bad, with flimsy reclaimed Masonite around them. But that has them tidied up enough that I’ll grin and bear them till Phase 2. (The Masonite will be painted white)

But back to the windows I put in, one of the best things about these is that the jambs are all wood with slim metal tracks mortised into them. So although they aren’t quite as pretty as old wood windows, they have a cleaner look than most new ones. They also require massive amounts of cutting in with a tiny brush. The thought crossed my mind while I was doing all this that maybe vinyl windows aren’t so bad after all. Impure, filthy thoughts! But it went away, and after a solid 20 hours or so, 3 of my 5 windows now look totally amazing. It’s Sherwin Williams ProClassic semi-gloss, which is totally smooth and beautiful and just shiny enough to show off all my biggest splurges. I only got one coat on the sashes, but they’re easy to take out so the second coat can wait until spring. 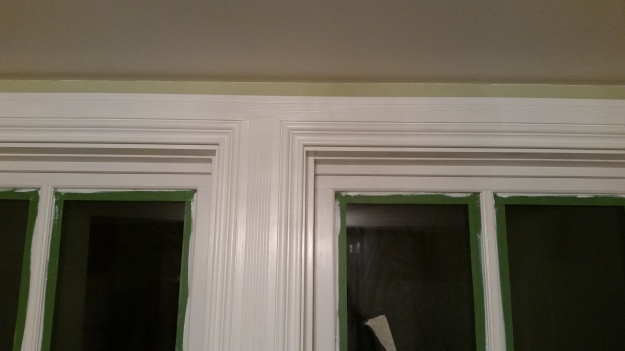 Then, how did Moving Day Number 4 go? Well, one of the friends who helped with the couch came back AGAIN (I’m really lucky not to have scared him away) and I got in another 4 big pieces of furniture and a rug. This included my grandmother’s buffet (now reborn as a dresser) that was previously storing random crap in my parents’ basement. 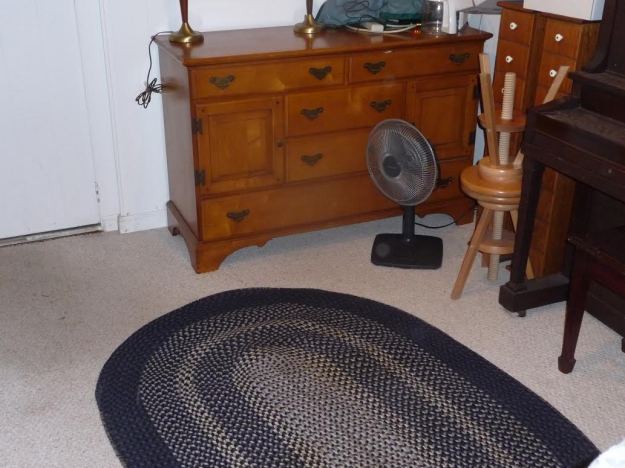 Her matching hutch took its place. Which is handy because my dad is now working from home and the books from his old office are standing between me and my kitchen stuff in the attic. And now he has a proper place to put them.

And I need to give my parents credit for another round of cleaning and tidying up including my totally gross mini-fridge. Though while they were doing that I was getting old window labels off with acetone and my fingernails, which wasn’t all that much fun either. After that THEY treated ME to dinner!

You ready to see the rooms? Drumroll please…

So, now I can think about window treatments. Aside from continuing to paint and finally getting that heat on, they’re up next. I also need to shampoo the rug in the front bedroom before I set up the bed. The front windows get either cheap junk plastic blinds from Home Depot or even cheaper junk paper shades from IKEA. But the back can get a permanent solution. I’m thinking stained wood blinds mounted inside the window jambs. And I might add floor length panel curtains as this is the only window in the house where that is possible.

But something functional for privacy first. Whatever I get, I want it to look good all the way opened. Because that’s how I like all my windows during the day. Maybe there’s something better than wood blinds for that. Any ideas?

Yep, I’m finally back onto doing stuff. All my upstairs doors are now stripped of paint! A few that were never painted still need their varnish stripped! 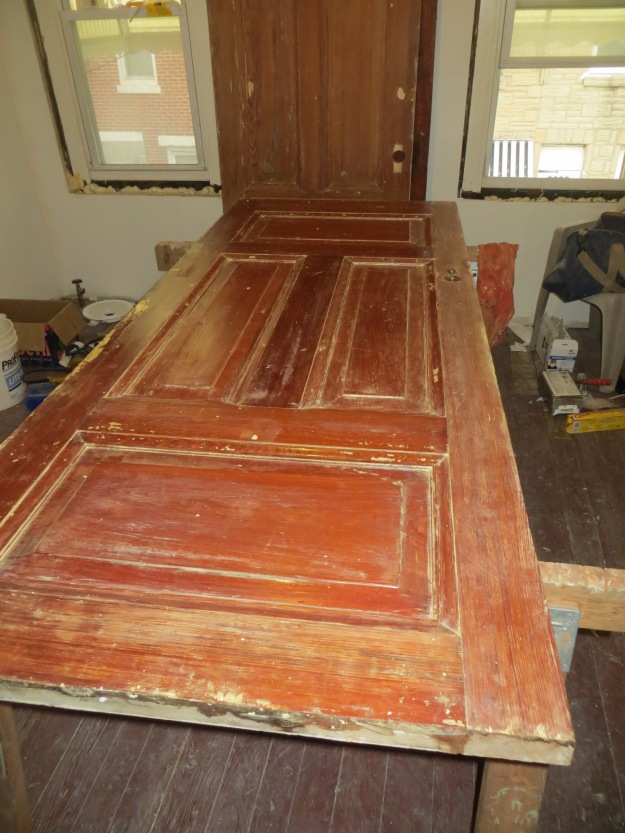 How did I manage this so fast? I found a corner to cut. I’m not doing anything to the back sides of the sliding closet doors. They’ll remain like this. I’ll probably give them a light scraping to knock off what’s loose. The neighbor’s kids are the only ones who might shut themselves in the closet, and they can judge me if they want. 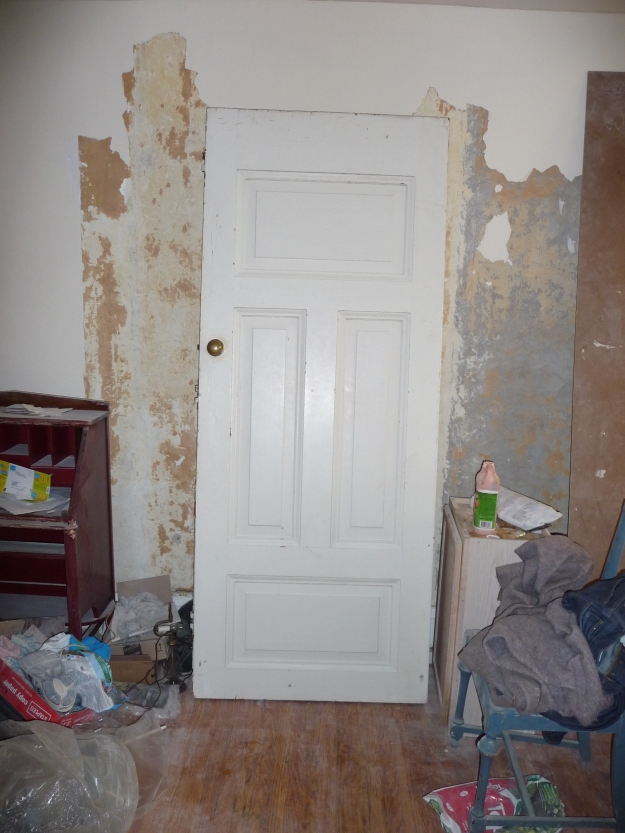 Awesome door. Yes it’s upside down. Trust me, the other one looks the same.

Now I don’t mean they’re completely done. I still have some bits here and there and the original varnish that didn’t come off is getting a little globby. Still, it means a lot to be done with the thick, heavy paint. Like this. Mmm, beans. 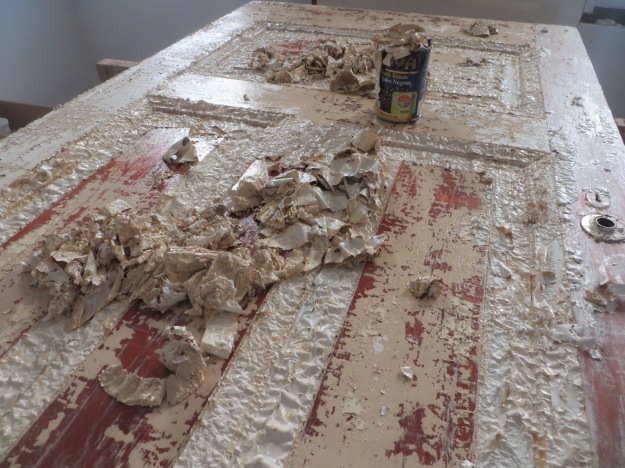 So my original plan was to use wood filler and repair all the gouges and paint the doors white to match the trim. The wood messed up this plan. It’s just too nice. Now instead I just want to get some kind of consistent coloring between the doors. The flaws stay as they were. They just look like character on nice wood.

So the rest of the doors. I have these for all openings from the upstairs hall.

I suspect that they’ll all end up kind of a medium wood color like the one on the left. All the doors have the awesome reeding on both sides except the linen closet and bathroom doors, which will have them on the hallway side only. I’m using these with white porcelain knobs.

And then in the back bedroom I have this awesome tall pair that forced me to build a sloped ceiling.

They’re not getting stripped because the paint is sound and I suspect that they were never stained and that the wood is paint grade.

Then there’s a bit of abuse I have to fix. The linen closet door looks like its previous owners mortised hinges with a Sawzall.

Though I’m leaving a lot of holes where they were, this abuse has to get cut off. And then I need to take off from the other side for symmetry and stain the new cuts to match the old door.

The massive heavy doors on the front bedroom closet are gonna slide. The pulls I got are big enough to hide the doorknobs but not this patch where there was once a lock. 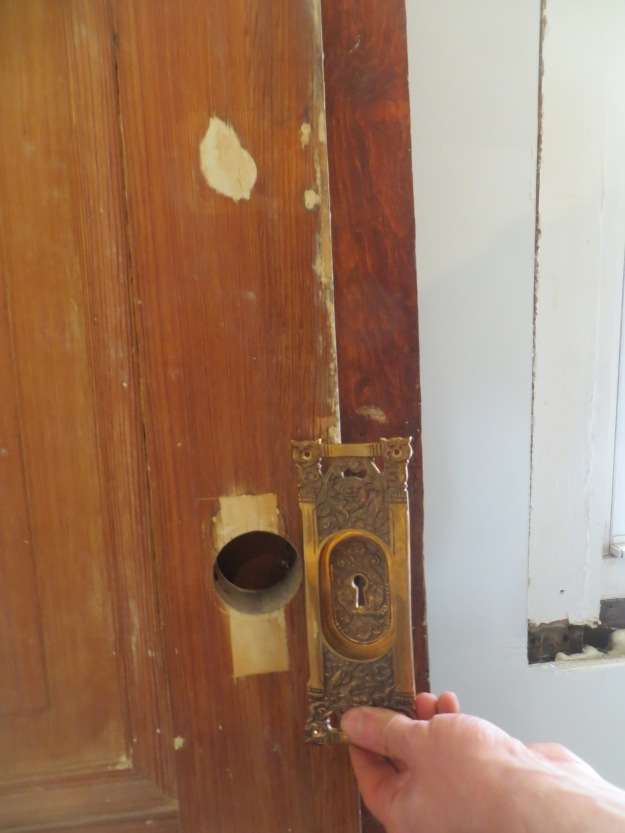 I might just paint them brown to match the wood. So, any advice? I’m thinking I’ll keep the doors as light as possible. Not blond. I want them dark enough to contrast with the floors. But I could go to a dark brown if I wanted to. Let me know what you think!

How bratty am I allowed to be? I spent a lot of time complaining about not making progress. Now? I’m going to complain about too much. Why? Because things have been a frenzy. I wanted a break after the patio door. Instead, the Irishman stepped into my house and said, “We should Sheetrock the living room!”

But what about the radiator pipes that need adjustment? The thermostat wire? The glued-up plywood scraps to get the floors to stop moving? Well, I scrambled to get the plywood up before he came through with the drywall. And up it went! He snapped a chalk line to keep the boards straight, and we made use of his awesome lift. Actually, we’ve used that all along but this time my roomie got a pic.

END_OF_DOCUMENT_TOKEN_TO_BE_REPLACED

Yes, you read right. The last week and a half has been a drywalling blitz. It upset me terrible not to mention this in the last post, but there’s so much visible stuff going on I we needed a post taking the long view.

As of now, the back bedroom is done! My roommate’s moved on up from the kitchen. 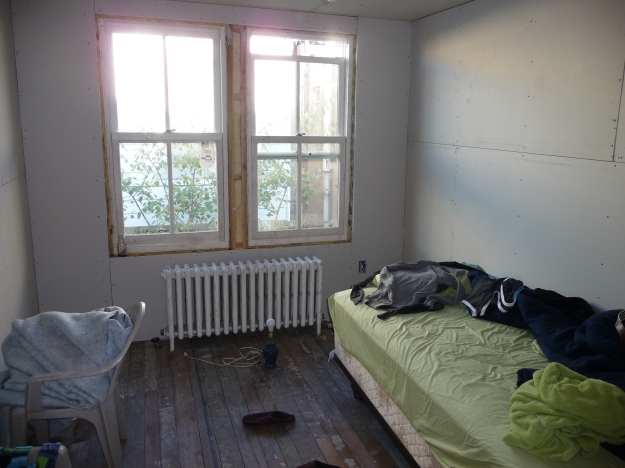 END_OF_DOCUMENT_TOKEN_TO_BE_REPLACED

My plumber’s been in! That’s right, I have a working bathroom!

Now it’s not all good news. Apparently I wasn’t supposed to tile all the way up to the valve, so my plumber got to have fun chipping out my work to make the trim piece fit. And he couldn’t make the one I wanted fit, so he swapped it for a more basic one. Honestly, no big deal. I like my shower head, although he also said he had trouble installing it and it was leaking like crazy. But still, it’s done!
END_OF_DOCUMENT_TOKEN_TO_BE_REPLACED